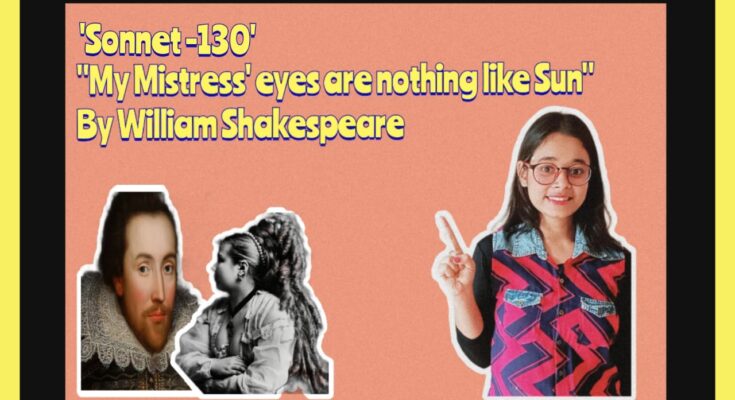 SONNET 130 – “MY MISTRESS’ EYES ARE NOTHING LIKE THE SUN”

Coral I far more red than her lips’ red;

If now be white, why then her breasts are dun;

If hairs be wires, black wires grow on her head.

I have seen rose damask’d, red and white,

But no such roses see I in her cheeks;

And in some perfumes I there more delight

Than in the breath that from my mistress reeks.

I love to hear her speak, yet well I know

I grant I never saw a goddess go;

My mistress, when she walks, treads on the ground:

And yet, by heaven, I think my love as rare

As any she belied with false compare.

BACKGROUND OF THE POEM

Sonnet 130 – “My Mistress’ eyes nothing like the sun”, is written by William Shakespeare, in the form of sonnet, a 14 lines poem, published in the collection of 154 sonnets in the year 1609.

William Shakespeare (1564-1606) was known as the greatest dramatist, actor and poet of English Literary Renaissance. He was the “national poet” of England and called as the “Bard of Avon”.

The first series (1-26) is addressed to a youth, or to a very young man, of great beauty, and

The second series (127-154) consists of sonnets to or about a certain ‘dark mistress’ whom the poet in some sense loves, or has loved, but whom he also dislikes himself for loving.

Sonnet 130 – “My Mistress’ eyes nothing like the sun” of Shakespeare is one of the best but different from other sonnets.

According to his way of writing sonnets, in the first 12 lines (three quatrains), it seems like poet is ‘criticizing’ his mistress (beloved) regarding her beauty but at the end of the poem, in the last two lines or couplet, one can find the actual settlement of poet.

In this very sonnet, Shakespeare has seen satirizing the poets (of Elizabethan period and Petrarchan), who used to write about his beloved in ‘clichés style’ and praise them by comparing with nature.

The idea and emotion which William Shakespeare tried to put in this work is “beauty lies in the eyes of the beholder”.

Poet says, the eyes of my beloved is not like sun, they not bright like sunlight. The ‘coral’ (, a substance which is found in the sea and which has a deep red colour) looks redder than the redness of her lips. Snow is white, but the breasts of my beloved are ‘dun’ or dark (or black) to look at. The hair on my beloved’s head is wire like in appearance, not even the golden one but dark black.

Poet continues, I have seen roses, ‘damasked’ (having a mixed colour consisting of red and white), mixed and naturally decorated by two beautiful colours, red and white; but I have seen no such roses in my mistress’s cheeks or my mistress possess no such charm. There are some perfumes which give more pleasure than the breath which comes out, ‘reeks’ (emits), of my mistress’s mouth.

Again, poet says; I love to listen whatever my mistress speaks, yet I know it well that the sound which comes after playing the music is far more pleasant. I acknowledge that I have never seen a goddess walking in real, but I know my mistress uses her only feet to ‘tread’ (a step in walking) on the ground.

But by swear of heaven, I believe that my beloved whom I love the most, is rare and the most beautiful one in the world, for me (or for me, she is unique among all the other women present in the world). But it will be wrong if I compare my beloved’s beauty with anything, as she is ‘extraordinary’. And the praise I am doing for my beloved might seem false for others but her personality doesn’t need any ‘belied’ (false comparison).

THEME OF THE POEM

Basically, through this work Shakespeare satirized poets who use exaggerate words (or hyperbole) to describe the beauty of their beloved. And put stress on the idea “Beauty lies in the eyes of the beholder” by describing the whole poem in this very concept.

RHYME SCHEME OF THE POEM

Sonnet 130 – “My Mistress’ eyes are nothing like the sun” by Shakespeare is written in ‘Shakespearean sonnet’ which is in the form of ‘three quatrains’ (4 lines in each or total 12 lines) and the last one is ‘a couplet’ (2 lines).

And, the rhyme scheme is ‘abab cdcd efef gg’.

CLICK  HERE TO READ ABOUT SHAKESPEREAN SONNET IN LENGTH.

Metaphor – Poet used ‘metaphor’ to put some ‘rhetorical effect’ on the comparison or while referring one thing by mentioning another to make meaning clearer.

Like, “If snow be white, why then her breasts are dun;

Simile – Simile is used to describe one thing in comparison to other.

In the very first line, while comparing the eyes of her beloved with sun, he says; “My mistress’ eyes are nothing like the sun”.

Alliteration – When a repetition of initial, identical letter’s sound occurs in a sentence, it is called alliteration.

Hyperbole – Poet used hyperbole (or exaggerated words) for criticizing the beauty of her beloved. He compared her imperfection with the objects present in nature, like; sun, snow, wire, damasked roses, perfumes and goddess.

Imagery – Poet tried to create the image of her beloved in the mind of the readers by showing her imperfections while comparing with other things. 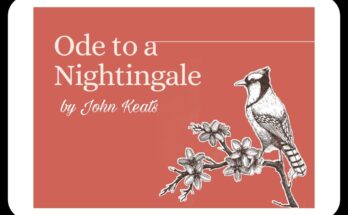 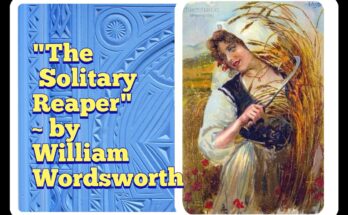 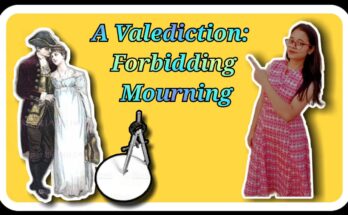